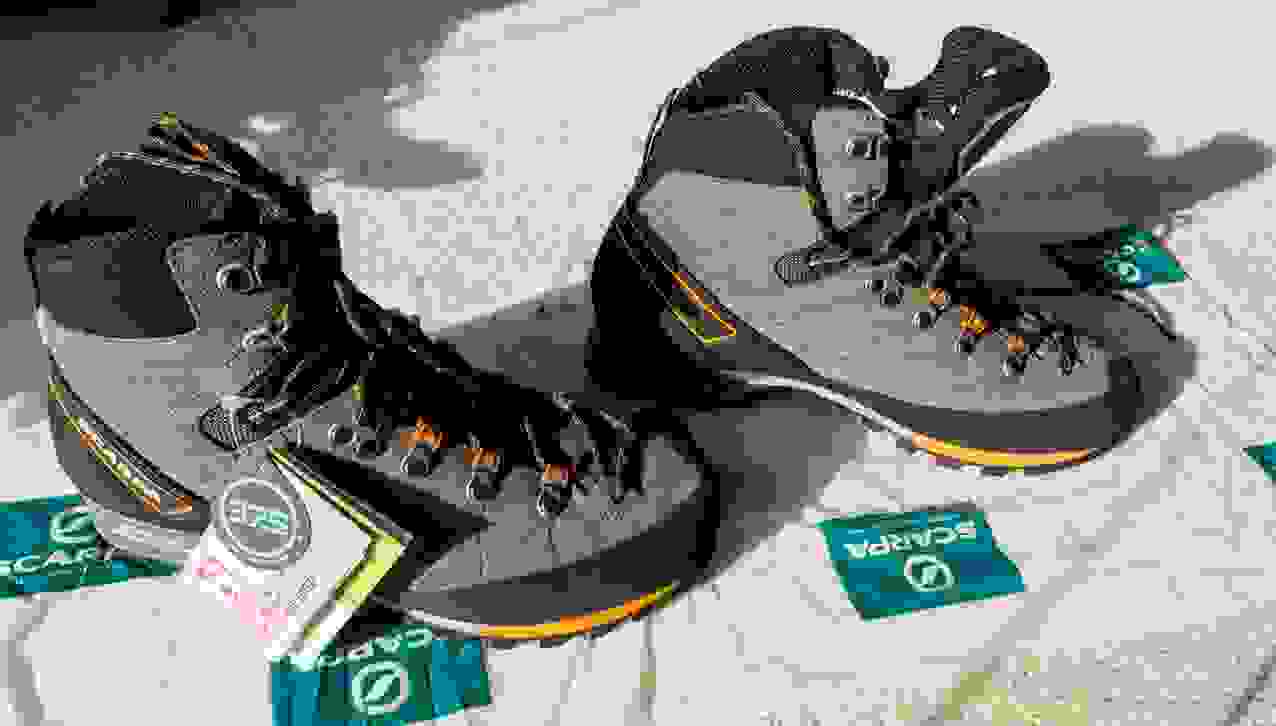 Last year Scarpa sent me two very different styles of footwear to review. The way things turned out especially with the weather, the Scarpa Mescalitos, a top end approach shoe, and the Scarpa Marmolada Pro OD, complimented each other well. Last May and June were wall to wall sunshine with unprecedented good weather in the Cuillin. As such, I lived in the Mescalitos, loved everything about them (except perhaps the rather garish colour scheme) and did multiple traverses of the Cuillin ridge shod in them. Perfect scrambling footwear.

My review of the Mescalito was well received and I was amazed how many clients subsequently turned up with pairs of them. Praise for them seemed universal. Come July though, things changed dramatically  and the sunshine was replaced by lots of rain and more substantial footwear was in order.

The Marmoladas hadn’t even been on my radar. Scarpa had been keen for a review of the Mescalitos and offered my choice of another pair. My option of Zodiac GTX were out of stock in my size so the Marmoladas were suggested. They looked good and apparently the Outdry lining was meant to be more hardwearing than goretex linings.

“The Marmolada Pro is a modern technical boot which is equally adept at trekking as it is scrambling.

The Marmolada Pro is a thoroughly modern boot built from the ground up to blend the best attributes of a mountain boot and a classic walking boot. The suede upper is directly laminated with an Outdry membrane: this construction has the unique properties of absorbing almost no water, while maximising breathability. The thermos-embossed suede is lightweight while still highly supportive, and the sock fit tongue gives a close fit across the forefoot.

The Vibram Drumlin sole on the Marmolada is low profile, giving more feel and precision, and the dual density EVA midsole gives a stable platform to scramble rocky terrain, while still offering great cushioning. The Marmolada has compatibility with C1 walking crampons.”

The boots arrived and my initial impression was how light they felt and how compact and neat they were for 3-4 season boots. They felt snug and comfortable right from the word go. As a proviso here, I must add that Scarpa footwear fits my feet well and their sizing seems consistent so I’d be happy buying any Scarpa product by mail/internet etc. Your mileage may vary, as they say, so try a pair on before buying unless you are already a confirmed Scarpa user.

The laces extend well down to the toe allowing for a wide range of adjustment thus making a tight fit easy for scrambling/climbing and a more relaxed fit for walking. Slick lacing system that locks off midway to allow the lower part to be tighter or looser than round the ankle.

The uppers are snugly supportive and this isn’t just down to the flexible lacing system but also the “thermo embossed exoskeleton” which supports and reinforces the fabric. The high rand provides great protection and I’m pleased it hasn’t shown any sign of damage, cuts or tears.

It sounds a bit too good to be true but these boots fit me like the proverbial glove, easily the most comfortable boots I have worn. They have been used a lot high on the Cuillin Ridge for multi day trips with reasonable sized packs. They have been worn a lot for low level walks and photography in extremely wet conditions not just underfoot but in heavy rain. So far they have proved completely waterproof and wet feet seem to be a thing of the past.

The OutDry is a waterproof lining and seems to stand up to wear better than the more traditional and better known Goretex membrane. Apparently Goretex or other similar breathable membranes are vulnerable to wear and tear; dirt or grit might physically abrade them, damage can be caused by one layer rubbing against another. OutDry seems to work well because the waterproof and breathable layer is hot bonded directly to the inside of the structural fabric and sole of the boot. According to Scarpa this is much more sturdy and lasts longer with no seams for the ingress of water.

In the very long term, judgement is still out but these boots have seen  6 plus months of fairly intensive use and still seem as waterproof as when they arrived. The external fabric does wet out quickly and this can be a bit disconcerting but so far my feet have stayed dry as a bone.

Breathability is an issue that hasn’t been a problem so far. I was warned they were a bit less breathable than Goretex but this seemed a fair compromise for longer lasting waterproofness and durability. Sweaty feet haven’t been a problem and these boots seem as breathable as Goretex lined ones although I have to say they haven’t been worn in very hot, dry conditions, something that has been distinctly lacking in the Cuillin for the last half year or so.

These are fantastic scrambling boots and worked well for slabby routes like the Dubh Slabs/Ridge whilst the laterally stiff sole makes for a good edging boot. Thus good for easy climbs and scrambles but so ridged as to impede walking. The Vibram Drumlin sole is grippy, surprisingly so even on wet rock and the treads work well on grass and general off road terrain. The sole unit is pretty shallow in depth and allows for a good feel of what’s going on under your feet.

They have been used for numerous overnight trips to remote mountain tops with relatively large back packs of bivi/camping gear as well as tripod and camera gear and have proved equally as comfortable with large loads. One thing I have to say about Scarpa (and possibly other makers) is that they provide very flimsy insoles which I immediately remove and replace with sorbothane ones.

After nearly seven months of use, the Marmoladas definitely look well used but there are no real signs of damage or abrasion. The uppers are good and the only sign of wear is at the front of the sole and heel which is only to be expected with a diet of Cuillin gabbro and trips up and down the Great Stone Chute. Waterproofing is still top notch and it will be interesting to see how it lasts in the more long term.

The Marmoladas are great 3 to 4 season boots. Accept their limitations and they are a very versatile pair of boots. Great for 3 season UK use and good for occasional winter use and also great for alpine scrambling perhaps with minimal amounts of glacier work. So, fantastic for walking and scrambling but not bad for easier winter walking.

The usual phrase is jack of all trades, master of none but here the Marmoladas buck the trend. They are impressively wide ranging and can be used for scrambles and easy climbs, via ferratas, backpacking with large packs and even for easier winter ventures. They are expensive for their spec but can’t be faulted for their comfort or durability and Scarpa have struck a good balance between technical prowess and comfort.